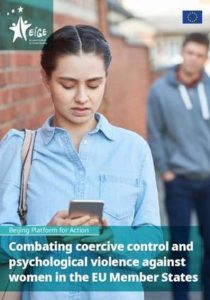 14 July 2022 – EIGE’s latest report on coercive control and psychological violence across the EU Member States proves high prevalence. However, increased criminalisation measures are starting to be put in place. More needs to be done.

What is coercive control and psychological violence? The following explanations characterise the nature of both forms of abuse.

As it stands, the statistics are stacked in a grim reality. Data from the EU Agency for Fundamental Rights (FRA) showed that across the EU, 44 % of women have experienced psychological violence from a partner in their lifetime.

EIGE recommends to specifically, explicitly and comprehensively treat psychological violence as a stand-alone phenomenon. It also pleads to include a digital dimension in the prevention and response framework targeted at victims of online abuse – as well as ensuring practices reach the most at-risk groups and those who have additional needs.

In EIGE’s research, younger women (under 30), women with a disability or health condition, non-heterosexual women and women with a migrant background experience psychological violence at a higher rate than the general population.

The implications of psychological violence and coercive control are deeply profound on women victims, where risk of suicide, depression, and post-traumatic stress disorder (PTSD) are particularly rife.

Additionally, the negative impact on victims’ children can be profound and could lead to an increased risk of victimisation and perpetration later on in adulthood.

Now, in the age of digital dominance, several Member States are taking the psychological impact of cyber violence into account. In Italy, the use of electronic communication is an aggravating circumstance for stalking and, in France, it is an aggravating circumstance for sexual harassment. In Austria, cyberstalking is specifically mentioned as a form of stalking in the criminal code.

From a legal perspective, in most EU Member States psychological violence is prosecuted under criminal offences that are not specific to the domestic or intimate partner context. Denmark, Spain, France, Hungary and Ireland have implemented specific criminal offences for psychological violence or coercive control. And only Denmark and Ireland use the language of coercive control in legislation.

Substance Use in Women