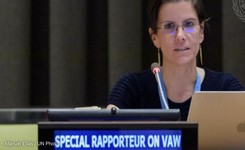 Whether holding the World Health Organization to account for allegations of sexual exploitation in the Democratic Republic of Congo or calling for protection for women and girls in Afghanistan, Reem Alsalem has had an eventful start to her time as the United Nations special rapporteur on violence against women, its causes, and its consequences.

Appointed by the U.N. Human Rights Council for a three-year term starting in August 2021, Alsalem made a detailed argument on the need for a gender-sensitive interpretation of Shariah, or Islamic law, within days of the Taliban takeover of Afghanistan that same month.

Now, as the Taliban prevent teenage girls from attending school and order women to cover their faces in public, Devex asked Alsalem — a consultant and former international civil servant who’s worked with the UN Refugee Agency in 13 countries — how religion intersects with her role.

This conversation has been edited for length and clarity.

How do you think about religion in the context of your role?

We know that religious leaders and faith-based institutions are very relevant and powerful nonstate actors who also have a lot of influence over their constituencies. So in that sense I find it important to engage faith-based leaders and religious and traditional leaders.

Of course, relativism in the name of religion can be a serious obstacle to human rights. But a lot of the modern human rights standards were not the first ones to come up with an understanding of dignity and freedoms. Many of these also have their roots in faiths and traditions that predate modernity.

Every belief and religion is, of course, not monolithic. Within it, there are also different interpretations, schools of thoughts, or applications. Some of them are supportive or uphold human rights; others don’t.

The issue is how to find the tendencies or the streams that are supportive of the realization of human rights and to recognize them, but also to engage with faith and the faithful in a dialogue around these issues.

International law is clear that states should promote and protect human rights irrespective of their internal laws and systems. Interestingly though, the … [Vienna Declaration and Programme of Action] acknowledges that the particularities as well as the historical religious and cultural backgrounds of states should be taken into consideration while they do that. We need to further unpack how to do both of these things.

What’s your response to the Taliban saying recently that women and girls are only allowed outside if they’re fully covered and that their male guardians will be punished if that’s not the case?

Even before the August 2021 change in the regime, there were long-standing concerns when it comes to violence against women and girls.

That said, with the August 2021 situation, myself and others expressed concern about the different policies that have been issued by the Taliban that affect women and girls. In one of the statements, we even talked about how these different policies seek to erase women from public life, seek to really marginalize them, make them invisible, deny them their fundamental rights.

If you look at these policies, you could say that they are so pervasive, so systematic, so many of them, that collectively, they can be described as violence against women and girls.

Based on what I was told on my informal trip to Afghanistan in April this year, we have to also, as an international community, be more inclusive of the kind of Afghan voices that are included in different fora. It shouldn’t be just the urban voices. It shouldn’t be just the ones in the diaspora. We really should allow for Afghan women to claim the space, irrespective of where they come from and also irrespective of what political views they hold.

What does it mean for women to “claim the space” in practice in a country like Afghanistan at the moment?

It means different things. It means that we have to support really women-led organizations, women leaders to continue to operate, to continue to exist.

Not just financially, it’s also supporting them in developing capacities and things they asked for — so for example, negotiation skills because, for example, what they want to do is to be able to negotiate directly with the Taliban. And this is something that I think the international community can still do more on. It’s not just building their capacity to negotiate but facilitating the space and platform where Afghan women can directly negotiate with the Taliban.

What we’ve heard from the women is also that they want to be able to make their own security assessment.

— Reem Alsalem, U.N. special rapporteur on violence against women, its causes, and its consequences

The U.N. and others are seeing how to make sure that women can be part of the needs assessments when it comes to humanitarian and recovery programs. I think it has to go beyond just the assessments to also make sure that we increase our accountability to women. So, find better ways of reporting back, of having them be part of the monitoring — which, granted, is incredibly challenging, given the latest set of policies.

Many Afghans don’t agree with living according to these laws. But also, it’s important to recognize that these positions are not necessarily based on the religious and cultural beliefs of a majority, even if that’s what the de facto authorities claim.

By imposing their beliefs on the wider Afghan public, the Taliban are denying those that do not believe in them their own individual freedom of thought, conscience, and religion, which is a fundamental human right.

Извор: WUNRN – 27.04.2020 Over the past decade, scholars, activists, and policymakers have repeatedly called…

Copyright healthrights.mk. 2022 - All Rights Reserved
Back To Top
×