Roma people have a long history of living in Europe with a presence recorded from the 13th Century. They are now widely recognized as one of the EU’s largest minority groups with an estimate of more than 10 million Roma living in Europe. The term ‘Roma’, first chosen at the inaugural World Romani Congress held in London in 1971, is now widely accepted across the European Union (EU) as a generic and pragmatic term to describe a diverse range of communities, tribes and clans.

“Change Can Start from Us!”- Roma Women in Italy Fight for Their Rights

A new generation of Roma women is rising up against multiple forms of discrimination, to claim their rights to jobs, education, and healthcare.

From her small sewing workshop in Isernia, in the centre of Italy, Concetta Sarachella designs clothes that have won awards across the country and abroad. “I always try to put in something from my Roma origins: the colours, the tissues, the laces,” she tells me.

Sarachella’s family is part of a Roma community which arrived in the Molise region centuries ago. The 35-year-old fashion designer and cultural mediator works under the name “Sara Cetty” and is seen as a rising star in Italy. One of her creations was exhibited in Rome during celebrations to mark 150 years since the country’s 1861 unification.

Despite honors and awards, Sarachella says she has had to fight discrimination due to her Roma heritage. “I am an Italian national and I’ve never had problems with papers, but I’ve faced other kinds of trouble”, she explains. When she applied for jobs, “companies rejected my résumé without even reading it. They saw my surname and they guessed that I was a Roma woman”, she says.

“Companies rejected my résumé without even reading it. They saw my surname and they guessed that I was a Roma woman”

Discrimination against Roma people is common in Italy. The demonisation of Roma communities, routinely described as a threat to public security, has featured in Italian election campaigns for the last decade.

Anti-Roma sentiments erupted across the country after the murder of an Italian woman by a Romanian Roma man in 2007. Politicians took notice, using this to their advantage.

After the 2008 election, Silvio Berlusconi’s government claimed that the presence of informal Roma settlements across Italy constituted a “state of emergency”. Roma were forcibly evicted from these settlements and sent to live in segregated “nomad camps” planned and financed by the state.

These camps are typically on the outskirts of cities, lacking in basic services including public transport. They have been described by rights groups as slums with poor sanitary conditions, often infested with mice and cockroaches.

A Roma camp in Italy. Photo: associazione 21 luglio/Facebook. – Italy is the only country in Europe that has created official camps for Roma.

In 2011 the European Commission told member states to develop national strategies for Roma integration. That year, the Italian government adopted a National Strategy for Roma Inclusion, with the stated goal of eliminating poverty and social exclusion.

This strategy included promises to increase Roma participation in schools, jobs, and public life. Things have not changed very much, however.

Earlier this year, the rights group Associazione 21 Luglio said that around 28,000 Roma in Italy had been recently targeted with forced evictions, or were living segregated in camps or in other emergency housing situations.

“The conditions of Roma living in these settlements are clearly below sanitary standards and the life expectancy among these people is 10 years lower than the average of the Italian population,” said their report.

Amnesty International has been equally scathing. In April they said: “Italy has breached EU anti-discrimination and race equality legislation for years”.

In 2015 the Pew Research Center found that 85% of Italians have “unfavorable opinions of the Roma who live in their country”.

Stigma is fed by disinformation. 2008 research revealed that only 0.1% of those interviewed said they had a basic knowledge of Roma, while 42% said they knew almost nothing.

This contrasts with figures in other EU countries where Roma comprise, for example, 9.3% of the population in Bulgaria, 6% in Hungary, 1.8% in Greece, 1.7% in Spain and 0.5% in France.

Other common refrains are that Roma “have to go back to their country,” or somewhere else, “because they are nomads”. But at least 70,000 Roma are Italian nationals. Others are from EU countries and the former Yugoslavia. Many are stateless.

Most Roma aim to live in houses, not in camps, and some already do. According to the Ministry of Interior – but contrary to popular belief – only 2-3% of Roma families travel in caravans and maintain real nomadic lifestyles.

‘the situation for Roma women is harder still’

If being Roma in Italy isn’t easy, the situation for Roma women is harder still.

Saska Jovanovic is a Roma woman who came to Italy from Kosovo after the war in the former Yugoslavia. She studied electrotechnical engineering and works as a cultural mediator.

“Roma women are the most exposed to discrimination and the least represented and visible,” she told me.

“They are discriminated [against] three times: as women, as Roma and inside our communities in all areas which are relevant for independent and dignified life such as education, healthcare, employment”.

In 2011, the European Roma Rights Centre made a submission to the UN alleging violations of Roma women’s rights in Italy including police violence, racist violence by private individuals, domestic violence and discrimination in accessing jobs and basic services.

According to the EU project Barabal, “the average situation of Roma women in core areas of life is worse than Roma men,” due to persistent gender gaps in education and employment. “Moreover,” it said, “Roma women are less aware of their rights and anti-discrimination legislation”.

“A strong patriarchal culture makes their position even worse,” says Jovanovic. “Those girls who have tried to emancipated themselves have found a wall from the Roma community. They are left alone, pushed away from their people”.

“a strong patriarchal culture makes their position even worse”

In 2010, after living in Italy for 12 years, Jovanovic created an organisation called Romni Onlus which then became a network: Rowni, the Roma Women Network Italy.

“I worked in nomad camps, and I realised that proud and educated women were not welcomed in the world of associations supporting Roma people, that are mainly or exclusively composed of male members,” she said.

“Roma women are totally excluded, they have no rights. Moreover, in Italy very few of them have education, economic independence, adequate language and cultural abilities to represent Roma needs,” she warned.

Sarachella, the fashion designer in Isernia, is the president of the Rowni network. She says: “I think the change can start from us. Women have the ace up their sleeve to change things”.

The fight for basic services

Many Roma women live in shacks and roulottes, in slum-like conditions severely limiting their ability to lead healthy lives.

In 2008 Save The Children interviewed Roma women who lived in camps in Rome. 70% said they didn’t have access to the national health service because of their legal status or lack of information.

Jovanovic says she has also experienced discrimination from doctors. “But I am educated and I know my rights, so I could argue,” she adds. “Many Roma women are not able to do so”. 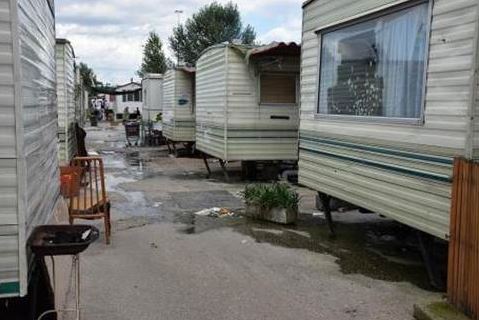 A Roma camp in Italy. Photo: associazione 21 luglio/Facebook – .Lack of education is a significant challenge. An EU rights report found 23% of Roma women in Italy are unable to read or write, compared to 12% of Roma men. Researchers noted that deeply gendered family and care roles make attaining education and training goals hugely difficult for women and girls.

“Many Roma women want to have an education and a job to be independent. They don’t want just assistance from administrations. But sometimes it’s difficult,” says Sarachella.

Another EU study found that 31% of Roma women in Italy reported feeling discriminated against when looking for work.

Early marriage is also a concern in the fight for Roma women’s emancipation and integration.

“Teenagers’ marriage means no school, no work, and [high] risks for health and poverty,” notes Jovanovic. For this reason, Rowni contributed to a EU project called Marry when you are ready.

The average age for becoming a mother, meanwhile, was just 18. In 84% of cases partners were also Roma or Sinti (a Romani group).

“Early marriage has always been the absent in dialogue and political planning for the inclusion of Roma,” says Jovanovic.

“We worked on the awareness of Roma families, parents of boys and girls. Every Roma parent who decides to postpone marriage, to respect a daughter’s choices, to ensure a proper schooling, is a victory for us”.

The plight of Roma women has also been acknowledged by the Italian National Anti-Discrimination Office which warns that they “are more likely to suffer from multiple discrimination” and that this also “creates multiple barriers to the inclusion of their children”.

It said it’s crucial for “gender-sensitive” polices to consider “the main role Roma women have as mothers and the positive influence of their empowerment on future Roma generations, which would lead to long-term inclusion”.

But Jovanovic’s organisation marks a turning point in the landscape of Roma associations. It is the first founded by a Roma woman. Her co-workers are also exclusively women. “Only united,” she insists, “can we win and change our future”.

The Crisis of Workplace Violence Against Women